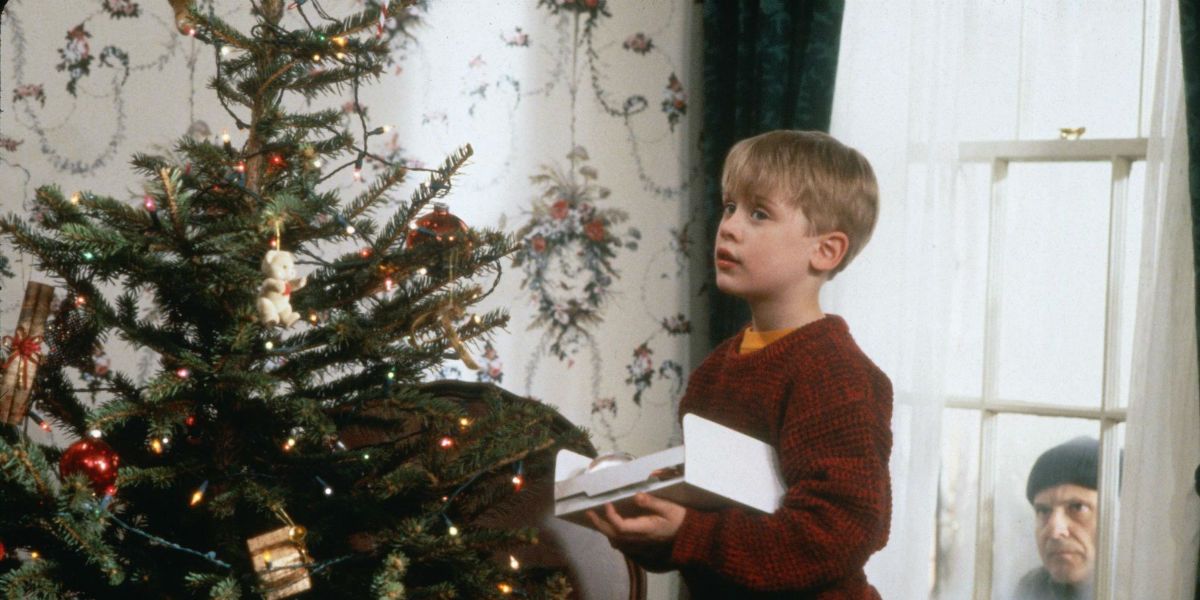 It is the most wonderful time of the year, but is it the most wonderful time at the movies? Christmas films have something of a shaky reputation, conjuring up images of apple cheeked brats, poorly animated reindeer and Bing Crosby in a dodgy cardigan. But the best Christmas movies have so much more to offer: in our list you will find psycho Santas, machine gun terrorists and home invading thieves, plus, of course, all the cockle warming sentiment, feel good frolics and classic Christmas movies for kids we demand for our festive viewing. So roast a chestnut, nog an egg and settle in to Time Out’s top Christmas movies.

The original (and best) version of the cockle-warming tale of a man who claims to be the real-life Santa Claus. The ultimate in cuddly Christmas afternoon movies, this original stars Edmund Gwenn as Kris Kringle, who must prove he is in fact Santa Claus and not least to a young girl who has lost the true meaning of Christmas.

This early version of Charles Dickens’s much-told story remains one of the finest, with Reginald Owen as Ebenezer Scrooge and Gene Lockhart as Bob Cratchit. There is something oddly comforting about watching snow fall in black and white.

Hearty and humorous 1954 festive romp in which Bing Crosby and Danny Kaye take their astonishingly popular two man lounge comedy dance revue to rural Vermont. It is a standard putting on a show movie with swinging tunes, harmless misogyny, and a nice line. It is as sickly sweet as an eggnog tsunami, but Bing’s brandy butter baritone and Kaye’s incessant, proto Jim Carrey clowning always manage to raise a smile.

This Oscar-nominated Disney short film casts Mickey as Bob Cratchit and Scrooge McDuck as his selfish boss, while Goofy, Jiminy Cricket and other familiar characters morph into the various ghosts. A nifty blending of Disney favorites with the Dickens classic.

This smart and very British 3D animation from the Aardman stable opens with one of life’s great questions: how does Santa visit so many homes so quickly? The answer, it seems, is a high-tech army of elves dispatched, SAS-style, from a silent spaceship disguised as a cluster of stars. But it never used to be like this, not before Santa’s eldest son, Steve modernized the operation. Nevertheless, one parcel slips through the net, so it’s left to Santa’s sensitive younger son, Arthur, and the retired, grumpy Grand Santa to deliver the package using reindeers and sleigh.

Surely everyone remembers how they felt, at primary school, when a literary masterpiece came back marked with a mere C+? This and many other such crimes perpetrated by the adult world on the inhabitants of kid-dom are exposed in this nostalgic mock-epic tale of young Ralphie’s quest to ensure that presents assembled under the tree on Christmas morning include a much-coveted BB air-rifle. Charmingly entertaining with an amusing narration to keep the adults in the audience smirking.

The film’s craftiest trick is that we never know which side Dante is on: these demonic invaders may threaten everything the well meaning, self satisfied townsfolk hold dear, but it may such a bad thing. And don’t they look like they’re having one hell of a party? The result is a jangling, lunatic sugar rush of a movie, in love with everything it satirizes and bursting at the seams with psychotic energy

Divorced businessman Scott Calvin rediscovers the love of son Charlie when he dons Santa’s red mantle after an unfortunate accident on his roof. The sleigh, the elves, and the magic all seem to indicate a dream, but when, ten months later, Scott can’t stop himself putting on the pounds and growing a fluffy white beard, he realizes that perhaps he should have read the small print before signing the Santa clause. Perennial bug-bears like the absence of chimneys and the size of Santa’s sack are readily explained by contemporary morphing effects, while the sarcastic Allen makes an admirably grumpy Father Christmas. The movie steers a shrewd course between bracing cynicism and old-fashioned make-believe.

Scrooged is not subtle stuff, and since Murray’s comic persona is uniquely hands off in terms of emotion, his final impassioned speech about the true meaning of Christmas is as embarrassing as Chaplin’s at the end of The Great Dictator. In update on the Dickens classic, with Murray as a miserly TV network president who rejoins the human race following spectral visitations. Miles Davis and David Sanborn busk in the wintry streets beside needy musicians’ sign; the usually elegant Forsythe turns up as a disintegrating ghoul, a golf ball embedded in his skull.

On Christmas Eve, visiting New York cop McClane (Willis) enters the high-rise LA office block where his estranged wife works, not realizing that it has already being taken over by sadistic smoothie Hans Gruber and his ruthless terrorists. Inside the building, having taken wife and celebrating colleagues hostage, the gang tries to crack open the Nakotomi corporation’s computerized vault; outside, LA cops and FBI agents squabble over jurisdiction, while opportunistic TV reporters gather like jackals; it’s up to McClane, having established a chance radio link with a passing patrolman (Veljohnson), to use the building’s 39 empty floors, lift shafts, and heating ducts to improvise diversionary tactics. McTiernan excels in the adrenalin-inducing action scenes, staging the murderous mayhem and state of the art violence as if he were born with a camera in one hand and a rocket launcher in the other. Pretty awesome for a Christmas movie, right?

Sure, it’s crude, episodic and half the jokes don not work, but ‘Christmas Vacation’ may be the only modern Christmas comedy which really stands up to repeat viewings. Much of the charm is down to Chase as the perpetually harassed Clark Griswold, whose attempt to host the perfect family festival is marred by unwanted relatives faulty electronics, yuppie neighbors, exploding turkeys, crazed pets and an unexpected kidnapping. The sight of Chase in fluffy housecoat and Norma Desmond hat weeping to old family videos is heartbreaking, and we haven’t even got to Mae Questel and William Hickey as the finest crazy-old-couple in comedy history…

Turns once more to the nightmare of travel, this time from a child’s perspective. Set to spend Christmas in Paris with parents and assorted relatives, young Kevin wishes everyone would just disappear, a desire granted when he is accidentally left behind by his preoccupied parents But the novelty starts to wear off when a couple of burglars target the house. And Kevin has to do everything he can think off to outsmart them.

Michael Caine as Scrooge, Gonzo the Great as Charles Dickens, Kermit the Frog as Bob Cratchit – just three of many reasons to love this witty, warm-hearted take on the classic story. Despite the presence of Muppets, it is – believe it or not – one of the more faithful versions of the book.

Comedy legend Bob Newhart immediately raises a smile as the elderly elf framing the story of Santa’s biggest little helper. Buddy is different because he’s a human, brought back to the North Pole as a baby when he strayed into the old boy’s sack during the Christmas run. He’s been raised in the traditional elfin ways of industrious good humor, but now it’s time for him to venture to distant New York and discover his real father is a grumpy publisher, who naturally thinks his ‘son’ is a dangerous loony. Must be the tights and the pointy hat. What follows is a fairly predictable ‘fish out of water romp with seasonal bells on.

Jim Carrey puts in an exuberant turn as the grumpy green Grinch of the Dr Seuss books. A hermit who lives on a rubbish dump near Whoville, the Grinch takes a dim view of the consumerist little town – except for child Cindy-Lou, who might just be the one to melt his heart. A great family Christmas movie.

This black comedy is pretty much a one joke film; true, too, that at the very end it sweetens much of what’s gone before with a spoonful of sentimentality. But it is, for the most part, quite hilarious in its foulmouthed malice and disenchantment with all things wholesome and familial; few films have been as funny about greed, lust, incontinence, midgets or kicks to the balls.

This is either unbearable schmaltz or a festive heart-warmer, depending on who you ask. Love is certainly all around in this ensemble comedy-drama set in the holiday season: even a school nativity play is an opportunity for romance. Comic standouts include Bill Nighy as an ageing rock legend who’s reduced to competing in the race to land a Christmas Number One.

As a complete package, Zemeckis’ surreal, hallucinogenic adventure is pretty inconsequential. But as a demonstration of modern computer animation techniques, it’s a kaleidoscopic marvel. A group of kids board conductor Tom Hanks’ mystery train and are whisked away to have their beliefs reaffirmed by Mr Claus. Cue a roller-coaster ride, stunning camera angles and superb sound effects. The same can’t be said of the ‘motion captured’ cast who look half dead. Perhaps that’s what scared the wits out of several kiddies during the media screening. In the end, then, this film is a) too creepy for the very young and b) mostly irrelevant to anyone expecting at least a modicum of depth.

A girl finds one of Santa’s magical reindeer in this cute live-action kids’ film starring Sam Elliott as the gruff, grieving father of eight-year-old Jessica (Rebecca Harrell), who’s obsessed with Christmas. Jessica’s optimism will teach the town a thing or two about the true spirit of the season

A leisurely feel good rom-com from the director of ‘What Women Want’, it has a big-name ensemble cast and ticks all the transatlantic boxes. An American woman (Cameron Diaz) and a Brit (Kate Winslet) swap houses for Christmas, both smarting from break-ups. While one gets Jude Law knocking on the door of a quaint Surrey cottage, the other finds Jack Black buzzing at the Hollywood mansion gates.