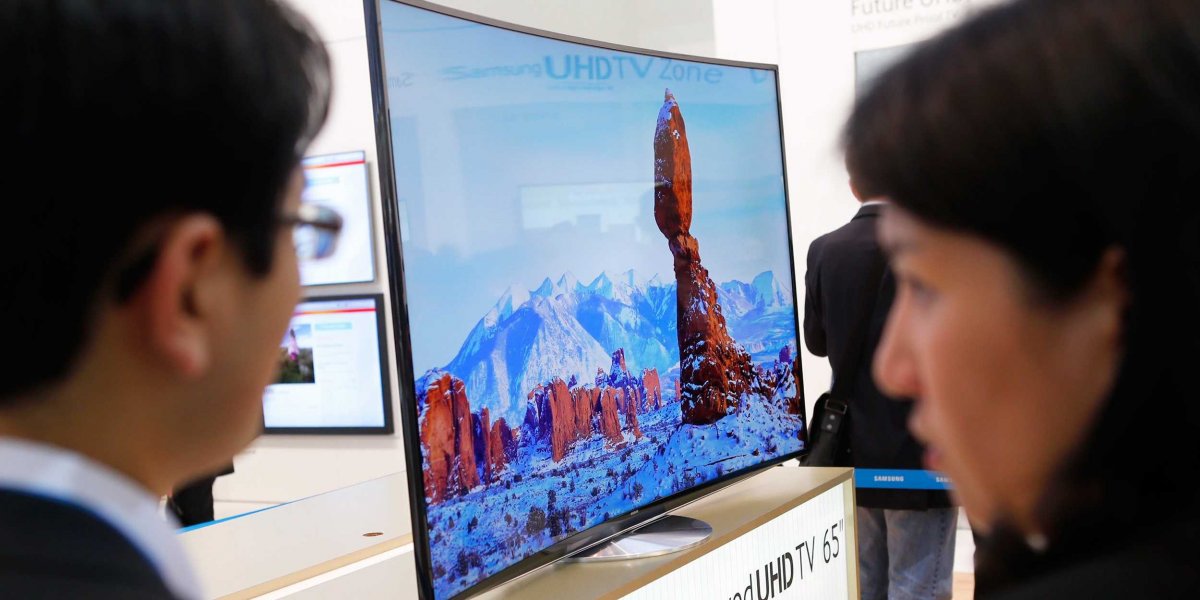 The Future of TV Technology

Technology will never stay put or go back, it will always keep advancing. This year has witnessed the rise of several of gadgets and options. TVs were affected the most with these upgrades, when the first plasma TV came out to the world we thought it was here to stay, little did we know that more inventions will make appearance in the few upcoming years. Now TVs became available with different options and in various shapes, OLED, Curved screens, and 4K video quality. During 2014 most of these technology options made appearance, we will try to discuss these qualities and decide from there what you should buy if you are looking for a TV based on those measures, don’t worry about outdated products, these TVs seem ready to dominate for a long period of time.

It is one of the most obvious facts to state that TVs have made a huge leap in technology this year, not only that, prices made a significant drop as well. All these factors contributed in making the market witness one of the most unusual activities this field have ever witnessed since decades. Buying a TV became more complicated however, with the enormous amount of products companies are bringing to the market, it became slightly difficult to pick up a good brand or a TV of high quality, the big brands, after seeing all this competition, decided to bring the prices lower for the consumer. This fact is partly true though, the prices of TVs in the first release are always at the top, but soon enough they descend significantly.

The history of TV is full of inventions and marvelous discoveries, but technology as we mentioned before, never seize to advance. Before the curved screens and high definition image and sound quality, there were Televisions that conveyed what was required from them and delivered fun to whoever bought one, they were a piece of luxury, but now they are just mere gadgets. This year witnessed the decimation of Plasma TVs. Big companies such as Samsung and LG have stopped producing plasma TVs, their spots in the market were filled by Panasonic who are considered as a symbol when it comes to Plasma TV technology, they improved the latter with new designs and options. These upgrades were brought to the ground however when the next generation of TVs made appearance.

Professionals, although the number of the advanced TV screen is rising, they concluded that the pictures of high contrast and natural multicolor are beginning to disappear, the plasma delivered these qualities whereas LCD failed to do that, but even with this disadvantage, the LCD made it to the market in huge numbers, and people bought them without any consideration.

Who would have thought that 3D will be neglected and not integrated to every TV in the future. 3D technology made a fuss when it was first released, movies were filmed in 3D option, TVs were advertised as 3D supporters, companies made 3D glasses and everything was going accordingly, the buying rate was high. But nowadays new TVs started discarding this option, channels stopped filming their programs in 3D such as Sky and BBC and hollywood also started reducing the number of films that are filmed in 3D. It is not a sure thing that 3D is going to vanish over time, we are only highlighting how noticeable it is that the option is being neglected by most companies.

As far as image quality is concerned, 4K (which refers to Ultra High Definition), and curved screens were the center of this year’s most marvelous achievements in this field. before 4K we had only the High Quality resolution which is 1080p and 1440p. 4K on one hand was released from various companies this year, the resolution 2160p became common, 4K resolution is an HD quality but it is multiplied 4 times the normal full HD (1080p), at the beginning as it is the matter for all technology equipments, the prices were very high, but as time elapsed, they abated very significantly, on the second hand, equipments for the 4K screens became available at the market to make the experience better, the second version of HDMI cable was released a short while after 4K screens, even channels and streaming media such as Netflix and Twitch TV enabled people to stream and watch in 4K quality. Official channels also adapted such quality in filming their programs, the world cup 2014 FIFA World Cup was filmed in this quality by Sky sports and BBC sports.

Curved Screens on the other hand, are being produced in high numbers by samsung, there are screens that are curved from the center to the sides and are less clearer unfortunately. Big Companies such as LG and Samsung have a big influence on people, this power enables them to make the public more submitted to their opinion, so if they advise that Curved Screens are the most efficient TVs ever made, a big proportion of people will agree. LG, Sony and Philips begun to provide the market with their Curved Screens in mid 2014 but the production was rather slow, whereas Samsung launched their debut screens, Philips made only one curved screen, Samsung have already gone worldwide, to give proof of that, samsung researches found that they have already sold 3 curved screen for every single normal LCD TVs, this fact will encourage other companies to produce more and compete for their place on the market.

This information however, may only serve as a bait for other companies to join the market, since Samsung is only producing one series that contains high technology and resolution when it comes to curved screens, The HU8500 Series. Samsung is still dominating the market for the time being despite the endeavors of other companies to compete.

We all know by now that this technology will one day change and all of this will become a part of history and outdated equipments, but one may wonder, what is the future bringing? or are we going to live the best of the TV experience? the answers are already under preparation as the the only hope for future TV is under developments, OLED TV it is called, and a big proportion of TV fans are counting on it to make watching television experience unique. If you are wondering what OLED technology is bringing to the market, we would tell you that without a doubt, the contrast, colour and handling possibilities are extraordinary.

OLED TVs were set to be released in late 2014 but the brands that were designing these TVs all agreed that this technology is too expensive to make and that the consumer will not be able to afford it which will cause the companies a great loss, this was announced in january 2014 at the CES (Consumer Electronics Show) that was held in Las Vegas. But don’t be worried about this, because LG is still carrying the project and it is expected to launch the first OLED ultra high definition TV in the near future, the only thing you should expect is the high price that will accompany these advanced technology screens, the price estimated is around 11.000 dollars. This can be considered as a fair price for such a gadget, one may only hope that by the end of 2015 more OLED TVs would make it to the market.

Every year technology is expected to be better and cheaper, this year however, we are expecting to see new technologies, the ones we have mentioned earlier, 4K, OLED and Curved Screens, and with that coming, it is probably that the prices will be very high with the first releases, but it is known that the prices will go down after a while. Despite all the bad things we might have said, and most of all the price, TV fans are enthusiastic and positive about the quality of the products from famous brands such as LG and Samsung, but it depends on the market competition if one brand of these released a 20.000 dollars TV, the others are expected to release one of similar quality with lower price. All in all, it is good for the consumer.

4K TVs are pretty demanding from the financial side, but this will only last for a short while as it is the matter to all other TVs, perhaps not OLED since as we said earlier, expensive to make, but 4K will be kept integrated in TVs from all companies which will lower the price pretty much, this will seem after years like a necessary thing when it comes to TVs, something that does not need consideration when buying, just like HD TVs when they first came out. The real challenge will be implied on applying these options on big screens that surpasses 52 inch, and the possibility of taking 4K technology to Curved Screens. There will be a vehement competition in the market, we all have to do is wait and embrace ourselves for the clash.

There is a slight chance that the upcoming years will bring another formidable invention to life. Making the choice of either buying a flat TV or a curved one will matter no more. Samsung and LG, always first to announce anything, have confirmed that there will come a time when they will release screens that can be bent and positioned to fit everyone’s style. The content and the options and features remain to be revealed soon, but the most important thing is that these companies have integrated systems that enables the watcher to do everything he or she liked, TVs will become a platform that you can perform multiple tasks on, Smart Systems Televisions are the goal of every company who endeavors to take over the market.