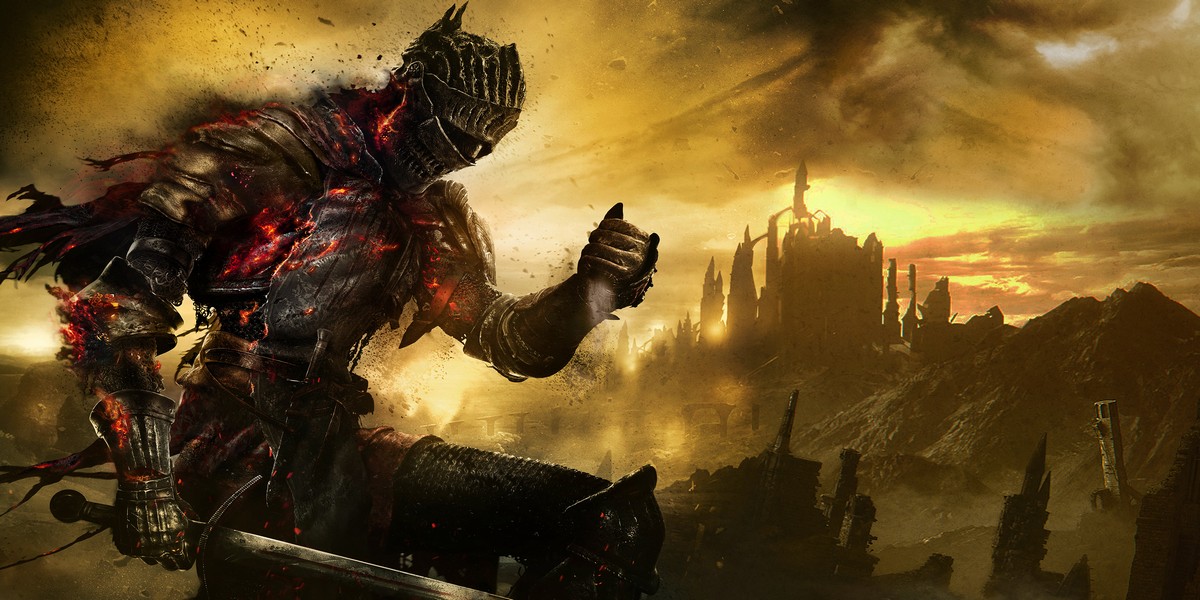 2015 has been a successful year for video games, games have received version of their favourite series, and if these games did not make it this year, they have been announced to be released in 2016. Games such as Call of duty, Battlefield and Assassin’s Creed are released every year, but that’s what we are here to talk about, we are bringing you a collection of the best games that have been released or announced this year, this collection is based on opinions of course, but our aim resides in making you happy and satisfied with what we offer. To begin with, there are several genres of games, in this article we will provide you with different genres hoping that you like at least one of what we have listed, so without further ado, here is the collection.

This is one of the most complicated, irritating, hard but fun video games I have ever played personally, the fanbase of Dark Souls is very broad, and in the past few years there were only 2 releases, whereas the 3rd release; Dark Souls 3 is set to be released in March, 2016. Dark Souls 2 features harder bosses that the first Dark Souls, it is a remake of the original game Demon’s Souls 2, but with more details and harder difficulty, along side with these upgrades, the producing company Bandai made sure that the graphics are way better, and there is more content to play, and for that they released so far 3 DLCs, and for people who are not familiar with the term, DLC is an abbreviation for Downloadable Content, it offers other features that the already released games did not contain, DLC contain different things and these things can all serve to make you enjoy your favourite game longer after you have finished it without getting bored, It can bring to your original game new quests, items, gear and also new areas and in our game’s case, new enemies, don’t get too excited though, you can really have trouble with only skeletons.

Dark Souls 2: Scholar of the First Sin is the full name of this version, it continues the story of the first game as the undead curse still hovering around and spreading over the doomed kingdom of Drangleic, you role is to dismiss the curse. To make research easy for you, the 3 other DLCs are called Crown Of The Sunken King, Crown Of The Old Iron King, and Crown Of The Ivory King.

The games has been welcomed with big applause and positive impressions and ratings, famous websites such as IGN have rated this game 9/10 overall, audio, graphics, gameplay, achievements, playability and so much more. Buckle up, strap your belts on, make your torches ready and prepare to die.

This game was released in 2010 for the Wii and the new 3DS by Monolith Soft and published by Nintendo of course, And although its older for 2015 it still delivers fun and intensity. The story takes place in a very unique setting, The frozen bodies of two gods that are held by a hatred bond and rivalry. The story begins in the prologue by depicting the war between the Mechonis and Bionis, the two gods that are bound to fight for eternity, the events resulted in Mechonis’ hand being cut by Bionis but they both move to stab each other at the same time. Eons after that, various form of life grew on the deceased gods’ bodies, the Homs, species of Bionis, and the Mechon species of Mechonix picked up the fight all over again. Dunban, wielder of the strongest weapons against mechonis stands to fight against the Mechonis, their power however was too much for him to handle, it crippled his arm, he and his friends feel the battle only to encounter dire situations.

This game have also received positive reviews from the majority of the fans, it was rated by IGN with an overall of 9/10. Xenoblade Chronicles X was released this year, it tells what’s left of the story but it received negative reviews in comparison with the first game, 8/10 on IGN. We advise that you play the first game before the second to get the utmost fun out of it and to understand the story from the beginning until the end.

Etrian Mystery Dungeon was developed by Spike Chunsoft and published by Atlus, the release dates however took place in March 5th, 2015 in japan, April 7th, 2015 in North America and September 11th, 2015 in Europe, it is a combination of two games from two different companies, Etrian Odyssey from Altus and Mystery Dungeon by Spike Chunsoft. Playing this game can be really tricky, it can punish you for a little mistake you have made after venturing so deep into a dungeon, if you don’t pay enough attention you can feel the regret in every action, it is fun. There many dungeons you can explore, plenty you can loot, and various monsters to slay, settling camp in your base town of Astorga where you can store your items, rest and feed your characters.

The most fun feature about this game is that you will never be able to memorise dungeons since every dungeon is structured in a different way, for instance, if you enter a dungeon that is structured very easily, next time you enter the same dungeon you are going to be surprised of how different it looks the only thing that is assured is the boss that is awaiting you in the end of the dungeon

The game was not expected to be a great success, many fans criticized the companies about the combination that they are conducting between two good RPGs, the feat was that it will be ruined for ever, the result was surprisingly good, the game was rated 7/10 on IGN. The game is available on 3DS.

Marcus Campbell the main character in State of Decay a man with a sense of leadership returns home only to find the city in chaos as the world turns apocalyptic, the events develops as they go looking for other survivors, in the ranger station Marcus and a friend of his, Ed Jones who was accompanying him in the fishing trip at Mt. Tanner encounter a group of survivors led by Thomas. Two of our characters go on a scavenging trip to look for resources only to come back after they heard the screams of the others, when they reached the station again, they find that people were killed by the zombies, in his endeavor to look for thomas, Jones was bit. the story evolves as they find Ed’s daughter and escape from Mt. Tanner only to find what is worse. Zombies aren’t a threat anymore, survivors becomes the threat as they fight over resources for survival.

this game may sound similar to the other games such as Left for dead and Dead Island, but it adds a new meaning to the gaming experience set in a post apocalyptic world governed by zombies. Two DLCs were released for this game, Breakdown and Lifeline, the former brought to the game new game mods, smooth playability and expansion of the number of characters you can take, whereas the latter brings a fictional city to existence that will ignite our characters to reach it in order to find a shelter far from what is hunting them. Overall, the game was rated 9/10 on IGN and Steam, it is available on PC, Xbox 360 and Xbox One.

Mortal Kombat X features a bigger collection of characters of all the other prequels, it also contains improved and smooth fighting quality, good cinematics, astonishing story mode and most importantly better Fatalities.

Following the defeat of Shao Kahn, Shinnok orders his army of Netherrealm demons and undead Earthlings to attack the Earthrealm, he led them through the war as they defeat all their enemies. Our squad that was formed of Kenshi, Sonya Blade and Cage set on an adventure to Raiden’s Sky Temple to visit the Jinsei Room where the source of life of the Earthrealms is hidden. In there they will find a vehement battle between the army of Shinnok clashing with Raiden and Fujin, the events will evolve as the squad itself run to Raiden and Fujin’s aid.

The game was released in April 2015 for multiple consoles, PC, PS4, PS3, Xbox one, Xbox 360 and even Android and iOS. Developed by netherRealms Studios and published by Warner Bros. this game had received bad ratings so far from some communities, 6/10 on steam, 4.5/5  on Google Play and 4.5/5 on Apple.

Set sail aboard ships across the high seas, fight for treasures, gather loot, take fortresses, hunt animals in the big wilderness, go whale hunting and assassinate targets, but before you do all this you should have knowledge about Assassin’s Creed story to enjoy this game completely, make sure you have a slim knowledge about what it is all about play the first 5 games or just read a summary, if you find yourself unable to this, then don’t worry, the events of this game will help you understand at least the main events.

Assassin’s Creed Black flag is the sixth game in a series of 9 games and our opinion is it the most fun to play, not so much the story is though. The best thing this game featured is sailing and naval wars, it is the first game to feature this mode and that is one of the reasons, if not the only one it is considered unique and fun. Edward Kenway the Assassin goes rogue after he was a part of the Templar Order, this betrayal as the templars call it will result in cities beyond destroyed, innocents die and the loss of treasure and gold, that is the most we can tell you about the story, you really want to play it instead of reading about it.

Ubisoft have managed to crowd a huge fan base because of the Assassin’s Creed series, people wait patiently every year for the next game of the series to be released, thousand of players play this and thousands rate it on the best game reviewing websites, it was rated 9/10 on Steam and 8.5/10 on IGN. The game is available on different platforms,  PC, PS4, PS3, Xbox one, Xbox 360 and WiiU.